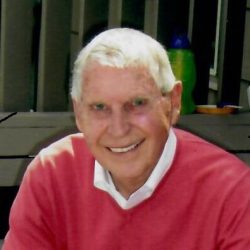 We say a sorrowful goodbye to a man of principle, optimism, unfailing joy and humor. Bobby cherished his memories of growing up on his Uncle Hjalmer’s farm. He regaled us with stories about the Armistice Day storm and racing trucks with his dad on frozen Lake Pepin. Bobby was a veteran of the U.S. Navy Air Corps. He left high school at age seventeen to join the fight in WWII. When he returned he flew airplanes for Elmer Hinck Flying Service, often delivering wounded aircraft for repair. Bobby’s love of fast cars led him to race Formula Fords and Corvettes. He flew gliders and was an experienced sky diver. He loved skiing, especially in Colorado, and he cried when he said goodbye to the mountains. Among his most admired people were Dale Earnhardt Jr., B.B. King, and Bobby Kennedy. Thanks to the G.I. Bill, Bobby graduated in Business from the University of Minnesota. After a successful career in sales at Xerox, he co-founded the Golle & Holmes Companies in the 1970’s. Subsequent to buying out his long-time partner and friend, John Golle, Bobby launched Holmes Corporation which has achieved continued success under the leadership of Tom Schmelz, Scott Miller and Mary-Beth Anderson. Whatever he achieved as measured by material success tends to pale when compared to the mark he left on the people fortunate to walk with him a while. He was vocal in defense of the vulnerable and under represented people in society, and exhibited moral courage when it was called for. He will be greatly missed by his wife Gayle; his children Shayna McSweeney (Rhett) and Brent Holmes (Ashley); and his five wonderful grandchildren who delighted him every day – Brenna, Aidan, Rhys, Evan and Connor. Bobby was preceded in death by his parents, Hannah and Robert Holmes, his first wife, Patricia Callahan Holmes in 1986, and his sister Magel Schieffert (Wesley). We, his family, are grateful beyond words for the years, days and moments we spent exploring, singing, laughing and learning with Bobby. Tonight and every night we will look up and search for him among the stars. As Bobby wished, there will be a small, private, family service in his honor. We thank his many friends for their love and support along the way and at this precious time. Our sincerest appreciation to the dear staff at Presbyterian Homes, Timber Hills, for their unceasing love and care. Also, many thanks to the amazing doctors, nurses and social workers at Health Partners Hospice. You all have ministered to his every need along with the extraordinary staff at Regions Hospital. You all made Bobby’s last mile bearable. “We were together…I forget the rest.” – Walt Whitman