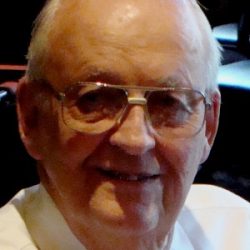 Age 94, passed away February 14, 2020 at the Augustana Care Facility in Apple Valley, MN. Survived by three of his four children, daughters Sheerie, Delores (Paul); his son Philip, deceased son David’s life partner Beverly MacKenzie along with his five grandchildren: Paul, Steven, Mark (Erin), Scott, Janae and five great grandchildren. Born in Dassel, MN and raised in Sandstone, Merlin was the son of Charles and Ernestine Keller. He joined the army in 1944 and later attended Miller Vocational Institute and Northwestern Bible School where he met his wife, Ruth. While raising their family, they lived first in Richfield and then Burnsville where they were instrumental in starting Highland Bible Church, Burnsville, MN. In later years they moved to Hampton and finally, in retirement, built a home settling in Apple Valley, MN. For 35 years, Merlin worked for Ford Motor Co, in St. Paul, MN in several positions such as line supervisor and finally as supervisor of general stores. During Merlin’s retirement years they bought an RV, since they loved traveling, and toured through 49 states with an additional interest in completing 4 books of their family genealogies. They also joined the Holiday Rambler Recreational Vehicle Club and in 1986 Merlin was appointed Minnesota State Manager. Merlin was a hard worker even in retirement using his many talents, such as woodworking. He also enjoyed farming their acreage in Hampton, helping farm neighboring land and working for SunSeeds research farm in Hampton. The family will be celebrating Merlin’s life at Fort Snelling National Cemetery on February 25th, 2020. He will be greatly missed.