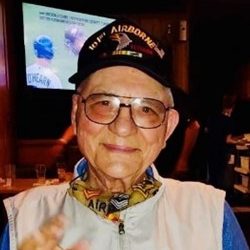 90 years young, passed away peacefully on Monday, September 19, 2022 with family by his side, and the love and prayers of so many others who grieve the loss of such a wonderful, caring and loving man.  He was an amazing husband, dad, grandfather, brother, uncle, and friend. There are no words to express how much he will be missed here on earth as he begins his next journey and reunites in Heaven with his loved ones.

Maynard was born in Britton, South Dakota to Jacob & Dorothy Olson, where he lived on the family farm until he left home to join the Army. He served his Country from 1952-1955 as a member of the 101st Airborne Division during the Korean War and was honorably discharged with the ranking of Staff Sergeant remaining inactive until 1960. He retired at an early age in November of 1990 after a 32-year career with NSP (now Xcel Energy).

Maynard and Fern were married in 1964 and moved to Apple Valley, Minnesota where he spent the majority of his life. He always loved working on projects around the house and taking care of his yard. It was important that he spent time as much as possible with family and friends, and helped them whenever he could. His family was everything to him! He was a very selfless man! Anyone who had the honor of knowing him knew how active he was.  He liked to always stay busy (to the end even) and loved helping and doing things for others!  Maynard was the first animal warden for Apple Valley and a member of the volunteer Fire Department. He was also a proud and founding member of the American Legion Post 1776.

Something we learned recently about Maynard was for about 18 years, without any acknowledgment or recognition, he would keep a major portion of Highway 77, that runs through Apple Valley, clean of trash and debris as part of his routine when he took his 10–20-mile bike rides about three to four days a week, up until he was about 86 years old! In 2012, for his 80th birthday, Maynard went skydiving and made his 37th jump! That was one of his many favorite memories. He always wanted to go again, but for medical reasons he was unable to do so. Anyone that knew him was amazed at how good of shape he was in, especially for someone his age! Doctors called him the young senior! He loved dancing and old-time music. His favorite was Elvis and he lived life like one of his favorite songs…. “I Did It My Way”!

A memorial service will be held 11:00 AM, Friday, November 4, 2022 with a visitation one hour before at American Legion, 14521 Granada Drive, Apple Valley.  Interment will follow at Ft. Snelling National Cemetery at 12:45 PM. (All those interested are welcome and invited to attend.)
Lunch will be provided back at the American Legion immediately following the Honor Guard service at Fort Snelling celebrating Maynard’s life and will continue throughout the remainder of the day!