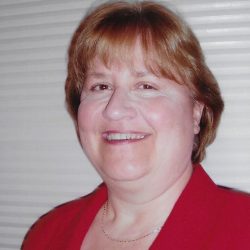 Visitation: one hour prior to Mass

It is with sadness that I announce the death of my dear wife, Joan, on June 18, 2022, in Budapest, Hungary. Joan died at the age of 69 of a pulmonary embolism, as we were leaving the River Ship Atla for a tour of this beautiful city. Joan and I traveled together for many years; Hungary was the 16th European country we were lucky enough to visit, added to three North American countries, one African, and one Asian country. Joan and I were married on June 16, 1973, so we had, only two days before her death, celebrated our 49th anniversary with a host of friends aboard the ship.

Joan is preceded in death by her parents, William Sr. & Viola Cipala; and her brother, James Cipala.

She is survived by her husband, Keith; was blessed with two marvelous children, Matthew (Heather Bergh), and Katie (Chris) Karow; she was very proud of our precious granddaughter, Riley, who had just days before turned the magic age of four; her brother, William Jr. (Pam) Cipala; sister-in-law, Ronell Benson; and many other relatives and friends.

She started her career at the U of M Hospital and was their first Ultrasound Technologist. From there she moved to Ramsey (now Regions) Hospital in St. Paul where she focused on what would become her specialty as a Mammography Technologist, where she became the Lead Mammography Tech, then moved into the same position with the Piper Breast Center in Minneapolis. Her devotion to her patients led her to receive the WCCO Good Neighbor award.

Joan was active in Toastmasters International, achieving the DTM (Distinguished Toastmaster) level. She was a quilter, and also a skilled knitter, rubber stamper, photographer, and acrylic painter. She was an avid reader and was active in book clubs. She was a longtime active member of St. Michael’s Catholic Church in Farmington, where she was a rosary maker, had been President of the Parish Council, and maintained communication with several seniors by sending cards and letters.

Memorial Mass of Christian Burial at 11am on Thurs., July 21, 2022, at the Church of St. Michael, 22120 Denmark Ave., Farmington, with visitation one hour prior. Interment Fort Snelling National Cemetery. In lieu of flowers memorials are preferred to the American Society of Radiologic Technologists (http://foundation.asrt.org).