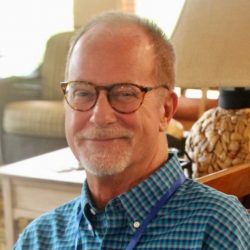 and one hour before service at Lakewood Chapel

Dave graduated from Roosevelt High School in 1972.  He was also a graduate of Brown Institute, studying Radio & TV.  He attended the U of MN for two years studying English and Journalism.  This served him well as he went from KABG-FM in Cambridge, MN to WCCO-AM/FM as an engineer, to DFL Caucus Media Director at the State Legislature for 26 years.  One of Dave’s first jobs was at the National Foods store in Mpls.  Ironically, he ended his working career at Bergan’s grocery in Mpls.

Dave followed his passion for hunting and the outdoors.  While deer hunting in MN was his greatest passion, he also loved to hunt turkey, bear and even moose.  He mounted an award winning bear skin that he proudly displayed in his apartment.  A highlight was taking a small plane into the Alaskan Tundra with good friends, Billy & Cecil to hunt caribou.

While working at the State Legislature, a co-worker needed a heart transplant that was not covered by insurance.  Dave organized fundraisers to pay for the transplant.  So much money was raised that Dave chose a charity, Children’s Heartlink and donated the rest of the money to it.  Dave eventually established The Children’s Heartlink Golf Tournament at Rush Creek golf course.  He co-chaired the event for years.

Dave’s other passion was golf, whether playing it or watching it on tv.  He was also on the committee for the Kirby Puckett 8-Ball Charity event.  He got to know Kirby, much to the delight of his sons.

Dave enjoyed traveling.  He and Lisa took trips to the Caribbean, Canada, London, Paris and Thailand. He loved his dogs.  He had many throughout childhood and adulthood.  He is now reunited with them all.  Dave is survived by his children: Laura, Tim and Pete; six grandchildren; siblings: Linda (Larry) Campbell, Jodi (Jim) Holst, Kris (Howard) Osten, Bob (Dawn) and Joe (Beth); many nieces & nephews.  A Special Thank You to Good Samaritan Justin Thill, Family Nurse Practitioner, Andrea Goldbaum, HCMC, friends & staff at Loren on Park.  Visitation 5-7 PM, Thursday, June 9th at Henry W. Anderson Mortuary, 3640 23rd Ave. S., Mpls.  Memorial Service will be held at 10:00 AM, Friday, June 10, 2022 at Lakewood Chapel, 3600 Hennepin Ave. S., Mpls. with additional visitation one hour before service.  In lieu of flowers, memorials are preferred to Children’s Heartlink.