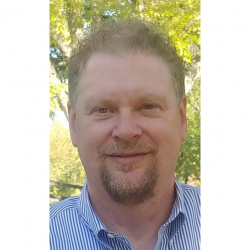 Chad was born on October 19, 1968, in Fargo, North Dakota. He attended school in Grand Forks, North Dakota, and was active in hockey, swimming and cycling. He graduated from Red River High School. Attending college at the University of North Dakota, Chad was active with Pi Kappa Phi Fraternity, and it is at UND that he met Liz. They were married October 16, 1993, in Plymouth, Minnesota. Chad graduated from the National Institute of Wood Finishing in 2011.

Chad worked at Quality Bicycle Products in Bloomington, Minnesota, for many years. He currently had his dream job restoring antique aircraft at Rare Aircraft Ltd in Faribault, Minnesota, and a perfect second job building wheels at Tonka Cycle and Ski in Hopkins, Minnesota. The past year was a special one for Chad working at Rare Aircraft, attending the AirVenture airshow in Oshkosh with Jacob, and watching William’s hockey team make it to the state tournament.

A wonderful husband, father, brother, son, uncle, cousin and friend, Chad put others first. He was a true craftsman who loved working with his hands. He loved watching Jacob and William play hockey and lacrosse and coaching their youth teams. Chad spent time camping, hiking, making maple syrup and attending air shows. But most of all, Chad loved his family.

Memorial Service at 11:00 a.m. on Monday, April 11, 2022, at Henry W. Anderson Mortuary, 14850 Garrett Avenue, Apple Valley, with visitation one hour prior. In lieu of flowers memorials preferred to the National Adoption Foundation (https://fundyouradoption.org/donate/) or an organization of your choice.