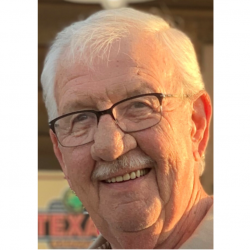 Vogt, Wesley James
Formerly of Truman, MN and currently of Apple Valley, MN passed away of cancer on August 26, 2020 at the age of 78. Wes is survived by his loving wife, Lee; children, Lori (Mike) McDevitt, Lynn (Dan) Schuman and Colby (Dana) Vogt; grandchildren, Jack (Kelsey), Ty (Claire), Cole (Emily), Dane, Joey (Abby), Hanna, Emma, Matt (Lori) and Tyler (Jenna); great-grandchildren, Maddie, Emma, Sydney, Abby, Nathan, Tinley and Paisley; siblings, Bernice (Lawrence) Wolf, Leroy (Linda) Vogt, Ken (Sally) Vogt and Steve (Carla) Vogt; many nieces, nephews, other relatives and friends. He was preceded in death by his parents, Elmer and Verona; grandsons, Bryan and Tommy Schuman; and brother, Neal Vogt. Wes attended St. John’s Lutheran School – South Branch and graduated from Truman High School in 1959. Then went on to attend Waldorf College where he played football. The 1962 Waldorf Football Team was later inducted into the Athletic Hall of Fame. He then moved to the Twin Cities where he met his wife of 56 years, LeeAnn Thurmer of Jackson, MN. Wes worked for the Truman Farmers Elevator and then opened his own business, Countryside Building Center. He went on to also have building centers in Fairmont, Madelia and Mankato, MN. Wes enjoyed playing Fairmont Fast Pitch Softball and later on a slow pitch team that he sponsored. He was involved in Truman Jaycees, Truman Fire Department, Truman Planning and Zoning Commission, coached his son’s Little League Baseball, umped and was on the “chain gang” for Truman High School Friday night football games. Wes and Lee went to Europe to see their son play European Football, enjoyed cruises through the building business, and spent 24 years relaxing with family and friends at their lake home in Okoboji, Iowa. Later in life, he and Lee spent some warmer months in Fort Myers, Florida. Wes was a huge sports fan of the Vikings, Twins, and Gopher sports. He was an enthusiastic fan of watching his grandchildren play. There were fun times with his siblings getting together, golfing, or attending a sporting event. Wes and Lee resided in Truman, MN for 53 years where they attended St. Paul’s Lutheran and Wes was a loyal Trumanite. In 2017 they moved to Apple Valley, MN to be near family and attended Prince of Peace Lutheran Church. Wes will be remembered for his ability to strike up a conversation easily with others, his clever wit that would add humor to a conversation, his strong work ethic and how he loved his family. A handwritten note on his desk read, “I don’t worry about what I don’t have. I am grateful for what I do have.” He will be cremated and there will be a private family gathering celebrating Wes’ life at Henry W. Anderson Mortuary in Apple Valley. Donations can be sent to the American Cancer Society or Prince of Peace Lutheran Church.