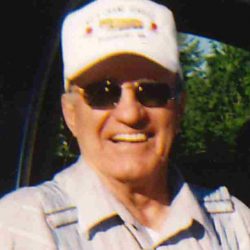 Wenzel, Victor “Vic” Albert, age 89 of Rosemount, MN died peacefully at the Rosemount Memory Care Facility on Saturday June 16, 2018 with family members at his side.  Vic was born in Eagan, Minnesota on July 20, 1928 to Albert & Caroline (Haus) Wenzel where he lived and attended grade school.  He started high school in Rosemount but quit at the age of 15 to go to work.  He worked for local vegetable farmers weeding onions and cleaning barns.  His first fulltime job was at Haver Machine Shop in St. Paul making engines for the WWII efforts, and then at American Can Co.

Vic enrolled in and graduated from Dunwoody to learn about metal and welding and was later employed at Cargill in Savage, Minnesota welding in the shipyard.  He worked at the St. Paul Ford Plant, the University of MN in Rosemount and finally Fischer Construction in Farmington where he traveled building roads.

He met Bernice Johnson in 1949 and they married on September 1, 1951 and started their own company called Vic’s Arc & Gas Welding.  In the mid-50’s three daughters were born to Vic and Bernice; Carolyn, Conny and Christine.  They continued to grow their business over the years and became successful in the welding and crane industries.  Vic had an uncanny ability to “engineer” almost anything that would move or lift something, which landed him the opportunities for many jobs and tasks that others would not take on.  This gained Vic the reputation that today has built the success of Vic’s Crane & Heavy Haul.

Vic was a life-long member of the Rosemount Lions Club and was the St. Paul Winter Carnival Prince of the South Wind in 1980. He was known for his collection of steam engines, tractors, cars and trucks.  He could never resist an auction.

He is preceded in death by his parents Albert and Caroline, and his two brothers, Lawrence and Wayne.

Those who desire may make memorial donations in memory of Vic to the charity of your choice or to Our Saviors Lutheran Church. A special heartfelt thank you goes out to the Staff at the Rosemount Memory Care Facility who have for the past 20 months cared for Vic with compassion, respect and dignity.