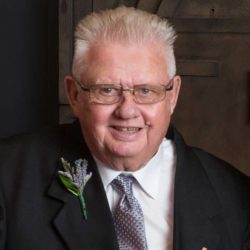 Thomas A. Osell, formerly of Fairmont and currently of Apple Valley, MN, passed away peacefully of cancer and surrounded by family on May 5th, 2020, at age 83. Thomas is survived by his beloved wife Faye; three children, daughter Tamera (Chuck) Rath, daughter Jan (Mike) Nawrocki, son David (Joni); his four beloved granddaughters Jackie (Charlie) Kirihara, Jennifer (fiancé Clay Cameron), Grace, and Katie; brothers Jerald, Alfred, and Robert (Susie) Osell; and sisters-in-law Shirley and Esther Osell. He was preceded in death by brothers Jon and James Osell; and sisters-in-law Barb and JoAnn. In his early years, Tom enjoyed listening to Johnny Cash and hunting with his brothers. After graduating from Dolliver High School in Iowa, Tom served in the military. Upon returning home, he married Faye in February of 1959 – the beginning of a loving 61 year marriage. Tom and Faye lived in Fairmont for 47 years and were members of Grace Lutheran Church. He worked at Park Motor in Fairmont for 20 years as sales manager and finished his career working at Hedenquist Motors and Militello Motors. He also worked at the Zaharia Family Funeral home as a funeral assistant which he thoroughly enjoyed. Tom loved volunteering at the VA and drove veterans in need of medical services to Sioux Falls and Minneapolis hospitals. In his later years, friends often found Tom drinking coffee with Faye at the local HyVee or Panera Bread. When meeting up for breakfast, he would usually wear his many jackets supporting the universities of his four granddaughters. Many will remember Tom’s frequent phone calls to friends and family. He was always “checking-in” and making jokes – a true family man. In recent months, Tom enjoyed a quote that would later be his final hand-written letter to Faye: “Until we meet again, find peace in Heaven’s hands.” He will be laid to rest at Lake Belt Cemetery in Ceylon, MN, and a celebration of Tom’s life will be held at a later date.