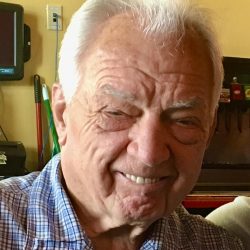 A private service will be held at Faith Lutheran Church in Minneapolis.

Roger H. Schmidt
Age 86 of new Brighton, born July 13, 1934 in Faribault, MN to Herman & Frieda Schmidt, passed away peacefully, November 7, 2020.
Roger was a dedicated member of Faith Evangelical Lutheran Church in Minneapolis. He was an over the road truck driver for USPS, did floral delivery for Chenoweth and was a welder at Butler Mfg. for over twenty years. He was also a member of the Brighton Square Association and the Teamsters Local #5441. Roger was a family man to his kids and grandkids in both the Schmidt & Geibler families.
He is preceded in death by his first wife, Rosemarie and brother, Warren.
Roger will be dearly missed by his loving wife of 27 years, Ann (nee Giebler); children: Ronda Beaupre, Russell (Denise), Ronald, Renee (Dick) Christenson, Rochelle Rowell, Rebecca (Jack) Hinkel and Robert (Jeanne); many grandchildren and great-grandchildren; siblings: Rachel Jordahl, Celesta Carlson, Richard (Geraldine) Schmidt, Sharon (Chuck) Rosen and Curtis Schmidt; sister-in-law, Jeanette Schmidt and many other family and friends.
A private service will be held at Faith Lutheran Church in Minneapolis. Roger will be laid to rest with his first wife at Acacia Park in Mendota Heights.