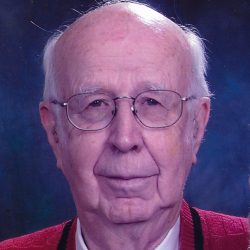 Age 96, of Lauderdale MN, passed away Jan. 9, 2019.   Robert was born July 26, 1922 in Sebeka, MN to Peter & Thea Agrimson. After his mother’s death, Robert was raised by his Aunt and Uncle, Alfred & Helene Agrimson on their farm by Peterson MN.  Robert lived and worked on the farm until he was 32, when he moved to Mpls. and studied to become an electrician. He eventually got a job at the Ford Motor Hydro plant where he worked for 27 years.    He married Joy Christofferson in 1961.  They were married for 53 years until Joy’s death in 2014.  Together they shared adventures of traveling, camping, dancing, canoeing, berry picking, lutefisk and laughter.  He was a quiet, stoic Norwegian who was always willing to help a friend or family member in need. Besides Joy, Robert was preceded in death by his siblings: Harriet Langseth, Margaret Currie, Bernette Vraspir, Paul Agrimson, Orrin Agrimson, and Betty Buseth. He will be greatly missed by his daughter, Ann Agrimson (Tim Gustafson); grandchildren, Gus and Peter; brother, Arne (Adeline) Agrimson and sister, Helen Powell and also nieces, nephews, family and friends.

Special thanks to the many wonderful caregivers at Health East Hospice, Johanna Shores & EagleCrest Presbyterian Homes, Synergy Home Care, and the community of University Lutheran Church of Hope.  Visitation 5-7 pm, Tuesday, Jan. 15 at Henry W. Anderson Mortuary, 3640 23rd Ave. S. Mpls. and also one hour before the funeral service at the church. Funeral service, 11:00 am, Wednesday, Jan. 16 at University Lutheran Church of Hope, 601 13th Ave. SE Mpls.  Memorials may be made to the church or the Peterson Station Museum, 228 Mill St.   P.O. Box 233, Peterson, MN 55962