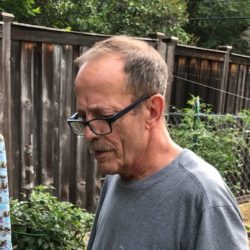 Visitation one hour prior

Born in Minneapolis on July 10th, 1953 to parents Lincoln and Betty.  Mike and his siblings grew up a stone’s throw from the Mississippi River where he spent much of his free time, fishing and swimming. As a young man, Mike would also be a frequent visitor to his brother Doug’s farm, shearing sheep, tinkering on equipment, and helping out wherever he could. During that time, Mike grew very close to his brother and a lifelong friendship would be cemented.

After graduating from Roosevelt High School in 1971, Mike volunteered for the Army along with his friend, Dave. He became an avionics mechanic and served in Vietnam with the 1st Infantry Division, known as “Big Red One.” Like many veterans of the Vietnam War, Mike rarely spoke of his time abroad. His experiences changed him as a person and would influence the trajectory of his life and health for years to come. Despite the emotional and psychological wounds he endured, Mike would remain a caring and generous brother, uncle, friend, and coworker.

In 1981, Mike began work at the Minneapolis VA Hospital as a steward and pharmacy technician. His duties included working with various suppliers and manufacturers, filling prescriptions, and ordering prosthetics. Mike cared deeply for the fellow Veterans he helped and often received praise for his ability to put his patients first. When his health began to deteriorate in 2004, Mike retired.

Following retirement, Mike often spent time with his beloved dog, Yoo-da, fishing or hanging out at the river or sharing his gift for gab with friends at the American Legion. In the summers, you could usually find Mike in his garden, carefully tending to his beloved tomato, pepper, and cucumber plants. His skill for cultivating vegetables would inevitably result in an abundance of produce that would find its way to the front stoops and backdoors of neighbors and friends. He was resourceful, practical, and frugal. Mike would arrive at family get-togethers with his signature packaging-tape-reinforced paper bag chock full of his specialties: salsa, banana bread, baked beans.

Mike passed away on February 28th, 2022 at the age of 68. He will be remembered by his family, friends and neighbors for his quirkiness and generous spirit more than anything. He was quick to lend a helping hand with yardwork or shoveling and often opened his home to friends and acquaintances.  Mike was preceded in death by his parents, grandparents, brother Doug Hutchison, sister Ruth Ward, and beloved dog, Yoo-da. He is survived by sisters Michelle Fink of Bloomington and Bettijo (Greg) Norman of Richfield, brothers Robert Hutchison of Rockwell, IA and Timothy Hutchison of Eagle Bend, MN, as well as several nieces, nephews, great-nieces and great-nephews.

Memorial services will be held on Friday, March 4th at 2pm at Henry W. Anderson Mortuary, 3640 23rd Ave S, Minneapolis, with visitation one hour prior. Following the service, friends and family are invited to gather for food and storytelling at the American Legion, 5600 34th Ave S, Minneapolis. In lieu of flowers, Mike asked that donations be made to St. Jude Children’s Research Hospital.