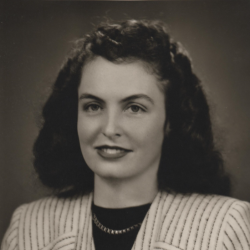 92, died Friday, May 21, 2021 at the Ebenezer Ridges Care Center as a result of severe pneumonia.
A private funeral service will be held at the Memorial Park Cemetery in Mason City, IA on Friday, May 28, 2021.

Juanita, known as “Nita” by her friends and family was born in Mason City, IA on February 20, 1929 to Harry and Sophia Berry. Nita was preceded in death by her father and mother; her sister, Francis Schneider; and her half-sister, Christina Paulson.

Nita graduated from Mason City High School in 1948. After high school Nita married on September 11, 1948 to Clevie Wayne Stevens. Nita and Clevie raised their children in Mason City, IA. As their children grew older Nita began working in the retail industry at Montgomery Wards and then JCPenney. Ultimately, she worked as the office manager for a dress shop called Style Shop in Mason City, IA.

Nita enjoyed and embraced the roles of mother and wife. Her focus was her family and friends. She was always available and willing to help in any way. She viewed doing for others as truly a privilege.

In 1971 Nita and Clevie moved to Waverly, IA where Nita worked for JCPenney until she retired in 1989. After retirement they moved to Eagan, MN to be close to family. She loved being a grandmother and spent as much time as possible with her grandchildren going to the playground, taking walks, playing games, teaching them the card game 500, and anything fun they wanted to do.

On May 30, 2000 her husband, Clevie, passed away after celebrating 51 years together as man and wife. Their bond was unquivering and unbreakable. Though Clevie had been in a wheelchair the last 16 years of his life and had required more care, Nita’s love and caring did not wavier and instead intensified and became more focused. She put his life before her own and therefore enabled him to have the highest quality of life possible.

During Nita’s life she touched many of us. She never complained about the burdens that life had given her and she never lost the desire to put others before herself. She felt that the best way to find yourself is to lose yourself in the service of others. There will never be another one like her and we will always be better because we have known and loved her.