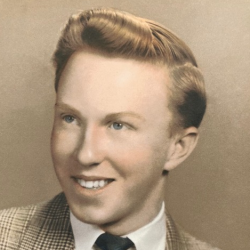 MacLeod, John
Age 86 of Apple Valley, passed away on Jan. 6, 2021. John was preceded in death by his beloved wife, Janice; son, Andy; sister, Peggy; and parents. John was born at the Lying-In Hospital in Boston on January 17, 1934. His parents were John and Katherine (née MacDougall) MacLeod. John grew up in Dorchester until moving to Natick in 1942. He graduated from Natick High School in 1952. The family moved again to Newton in the summer of 1952. John attended Northeastern University, College of Engineering. After attending Northeastern University, he enlisted in the U.S. Navy Flight Training Program. John went through flight training at NAS Pensacola as well as NAS Corpus Christi. He was honorably discharged and accepted a job with Northeast Airlines in Lebanon, NH and Boston’s Logan Airport. While in Lebanon, he met and married his wife, Janice Hastings, in 1959. John worked for Control Data in Waltham, MA and in 1976 he was promoted and accepted a position for corporate headquarters in Bloomington, MN. John took early retirement to use his gregarious personality and gift of gab to pursue a career in commercial real estate, specializing in the sale of bars and restaurants. John is survived by his children, Bobby Hastings, Pam (Keith) Baines, Tracie (Richard) Sullivan, John (Janae) MacLeod and Jeannette (Scott) Gunhus; grandchildren, Charles, Nathan, Adam, AJ, Jordan (Jay), Ashton and Eugene; siblings, Miriam Winston, William MacLeod, Mary Helen Corcoran and Bonnie MacLeod; John will also be remembered by 27 very special nieces and nephews. John was a charter member of the Apple Valley American Legion. He was a Mason at the Corinthian Lodge and a past Commander at the Zuhrah Shrine Minneapolis. John had a special interest in learning and playing the bagpipes. Family Service will be held at Henry W. Anderson Mortuary, 14850 Garrett Ave., Apple Valley. Interment Fort Snelling National Cemetery. In lieu of flowers, memorials are preferred to Open Circle Adult Day of Apple Valley, 14610 Garrett Ave., Apple Valley, MN 55124.