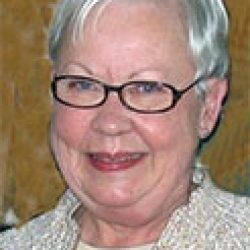 Joan was born in Minneapolis, the third of four children. She was baptized and confirmed in the Lutheran faith. She attended Minneapolis Public Schools and graduated from South High School in 1965.  She maintained lifelong friendships with several South High classmates and she and Joey were active planners on the Reunion Committee for the South High Class of 1965. Her long career in the telecommunications field started in Minneapolis and included moves to Iowa and Missouri before her return to Minnesota. She gained new friends in the workplace and maintained lasting friendships.

Joan enjoyed celebrations with family; shopping online and at nearby department stores; going out to movies and meals with friends. She enjoyed her golf outings with Joey and was in a women’s golf league. They took several trips while both enjoyed good health. She was an avid reader; a pro at completing the NY Times Crossword Puzzles; and a fierce Scrabble player, who would set up the board with any challenger. She displayed her artistic talent as a freelance painter and decorator, who could arrange unique, similar or unrelated objects into interesting vignettes in any room.

Per her wishes, private graveside services have been arranged at Fort Snelling National Cemetery. “Together Again” – the inscription on Joan and Joey’s niche – will reflect their years spent together, the years after Joey’s death and their final reunion.

Memorials are being directed from the family to the Memorial Rifle Squad of Fort Snelling, a dedicated all-veteran, all-volunteer team that provides military honors for veterans at Fort Snelling. Our dad, Robert Anderson, was one of its six founders in 1979.