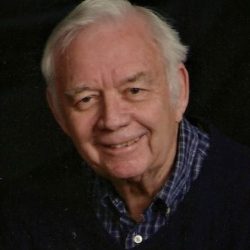 Private Family Services will be held.

Thoms, Duane F.
87, passed away on September 6, 2020 following a long and courageous battle with Lewy Body Dementia. Selfless in life and in death, Duane donated his body to science at the University of Minnesota. His hopes are that research can benefit current and future Lewy Body Dementia sufferers. Duane was born on May 10, 1933 to Ralph and Leona (Freeman) Thoms. Following graduation, he attended the University of Minnesota for two years in its electrical engineering program. Duane was called to duty in 1954 and served in the U.S. Army stationed at Enewetak Atoll in the Marshall Islands. Duane married Elsie (Dale) Thoms on December 28, 1956. His entire career was spent in the computer industry. He traveled extensively overseas and in the States. In 1971, Duane and his family moved to France for 4 years. He is survived by his loving wife, Elsie, of nearly 64 years; daughter, Kim Thoms; son, Rick (Clair) Thoms; 5 grandchildren; 5 great-grandchildren; and brother, David (Shirley) Thoms. Duane was preceded in death by his parents; a brother; beloved son, Paul Thoms; and daughter-in-law Carrie Thoms. A private ceremony will be held on September 30, 2020 at Henry W. Anderson in Apple Valley, MN followed by a military ceremony and interment at Ft. Snelling National Cemetery at a later date.