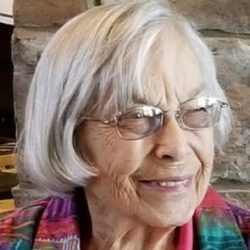 age 97, of Apple Valley, was brought home to be with Jesus on Thursday, January 20, 2022. She was born to Richard and Lydia Engebrecht on January 31, 1924. She was united in marriage to Frederic Lussky on August 28th, 1954. They had 4 children: Barbara, Steven, Glenn and Marilyn.

Doris spent many years raising her children as a stay at home mom, chief cook, chief financial officer, piano instructor and church organist. Prior to raising her children, she worked as a secretary for several small firms. She returned to work when her children were grown, working as an executive secretary for Control Data until her retirement in 1985. In her free time, she also loved playing the piano, and could be found entertaining others with her music well into her 90’s.

Doris is survived by her husband Frederic, daughter Barbara Lussky, sons Steven Lussky and Glenn (Carolyn Graham) Lussky, grandchildren Kristin (Peter) Faugstad and their 6 children, Karyn (Michael) Lukasek and their 5 children, and Ryan (Amanda) Lussky and their 2 children, and sister Arla (Eric) Meyer. She was preceded in death by her parents, sister Norma, brothers Norbert, Richard, Victor and Franklin, daughter Marilyn, and daughter in law Rebecca Lussky. A special thanks to all The Brighton Hospice staff and the staff at Orchard Path Assisted Living who all wonderfully cared for Doris. The funeral service will be held at Messiah Lutheran Church 16725 Highview Ave Lakeville, MN on Monday January 31 at 3pm with visitation one hour prior to the service. Memorials may be directed to a charity of your choice.