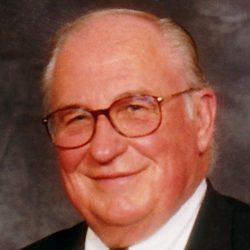 age 87, passed away peacefully Thursday, October 8, 2020 (at Mission Nursing Home, Plymouth).  Jack’s passing was followed quickly by other loving members of our family.

Born and raised in St Paul, by his parents Clarence and Rose (Svec) Hansen, with his two sisters, Dorothy and Josephine, it remained a special city to him.

After graduating from Cretin High School in 1950, Clarence (Jack) attended the University of St. Thomas for three years, and then entered the United States Army. He served two years before deciding to pursue a different pathway.

Jack worked for many years at Univac Systems (Unisys) in early computer sciences. This allowed him to work around the country, first in Minnesota, followed by Colorado and California. During this time in his life, he and his wife, Alice (Peters) Hansen had 5 children, 3 daughters and 2 sons.

The pull to return to Minnesota was strong, so in 1975, he and his family returned. Around this time, Jack desired a career change and therefore began pursuing his real estate licence. Jack prided himself on being an honest real estate agent and loved working with people to realize their dream of buying or selling a home.

Jack loved driving vacations/holidays and the more driving the better! He loved commenting on landmarks and places as they whizzed by the windows.

Jack enjoyed being involved in his beloved Catholic Church, whether it being a lector or helping out as part of the Eucharist team. With his booming voice, he was remembered by many parishioners and visitors alike.

Jack was an avid reader – especially the newspaper which he would read from front page to the last byline. He also enjoyed documentaries and detective shows.

Jack was so proud of the adults his children have become – their accomplishments and the lives they lead. He loved all of their spouses and knew they had chosen well.

Grandpa Jack loved each of his wonderful grandchildren: Alissa, Peter, Amanda, Victoria, Noah, Alex, Grace, Mia, and the youngest trio, Phoebe, Dash and Daphne. He truly cherished them all. He was even blessed to have met his great grandsons, Hunter and Boone.

Jack is remembered as a storyteller, and people were always entranced by his humorous stories and corny jokes – all of which produced great big laughs. Especially from Jack himself even after he retold the same one over and over again! Most of which his family knew by heart and would roll their eyes about!

That is what we will miss the most – the funny stories and jokes. Rest in peace Dad and Grandpa Jack. Graveside services for close family are being held at Fort Snelling National Cemetery on September 22, 2021.