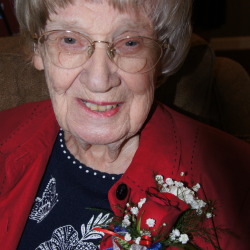 Age 98 of Apple Valley, passed away peacefully on April 15th, 2020 surrounded by her family after a 15 year journey with Alzheimer’s disease. She was born on a farm near Hendricks MN on February 26, 1922 and graduated from Hendricks High School in 1931. She taught in a country school near Hendricks before getting married to Paul Digree on November 20th, 1942 in Minneapolis, where she lived most of her life. Paul started his own photography business and Alida worked for 35 years at IDS as a customer service representative and helped Paul with their business. They had one daughter JoAnne “Joey”. Alida was widowed in 1960 and on Dec 1, 1973 she married Burges Johnson, a former classmate from Hendricks. They moved to Bloomington and had a happy 10 years together before his death in 1984.

Alida was raised by her paternal grandparents, Christine and Ole Thompson, after the untimely death of her mother when she and her sister, Adele, were infants. Her father, Bennie Thompson, suffered with mental illness following his service in WWI.

Alida was a loving wife, mother, grandmother, sister, aunt and friend. She was a faithful Christian and was a member of Messiah Lutheran Church in Minneapolis, Transfiguration Lutheran in Bloomington, and Christus Victor Lutheran in Apple Valley and always volunteered time at her church. She volunteered at Fairview Southdale Hospital, Sons of Norway and wherever she saw a need. She was proud of her Norwegian heritage and visited Norway and enjoyed traveling with friends after her retirement.

The family wishes to thank the St .Croix and Ecumen Hospice teams and her caregivers at Seasons of Apple Valley for their loving care on her Alzheimer’s journey.

In spite of the many losses Alida experienced, beginning with loss of her parents, the Great Depression, WWII, and 2 spouses, she lived her life with a grateful heart. She worked hard and enjoyed life until Alzheimer’s took her memory.

Because of the COVID-19 pandemic, a celebration of life will be held at a later date. Interment will be in Hendricks, MN.

Memorials are preferred and will be designated by her family.